I was excited to see that Victoria has been playing host to a TEDx event for the past couple of years, learning about it unexpectedly when I found out my next door neighbour spoke at the event last year.  The schedule offered a cross section of local and invited speakers, definitely something to check out.

Those familiar with the TED concept know that TED’s reach has extended into an extensive online presence– I watch TED talks online, have the app on my phone, and a large selection are available on Netflix as well. Given this I was a little curious about attending in person – I was hopeful that I would find the energy and dialogue that you really only get being in the room with colleagues. As it happened, it delivered handily. Plus, waffles!

I began the day with an auspicious conversation with a nice gentleman that had come down from North Saanich for the day. He had the pleasant affability of a favourite uncle but was obviously big on issues in his community; we covered agriculture, amalgamation and buying local all while waiting for the doors to open. I got the sense by the buzz that the diverse crowd was equally keen.

Some highlights for me:

Asha De Vos, blue whale researcher from Berkley, CA had some great insight on her work and had all of us non –TED talkers felling a little better about what we had done with our lives (or rather had yet to). It was entertaining to hear expressed what a lot of people are probably thinking when they go to TED- “how am I going to catch up to what these people have accomplished?!” I appreciated the graph she used showing the average age of Nobel Prize winners – I might still have time!

Talking “making makers” with David Lang from San Francisco, combined with Ann Makosinski’s pictures of her building cardboard inventions at age five got me thinking about setting up an improved workbench and tinkering spot for my boys.

Vicki Kleu and Austin Sawyer, combined with the aforementioned Ann Makosinski had me and my neighbours in the aisle agreeing that they were light years ahead of where we were in high school… 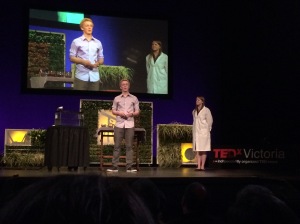 The image of organizers and volunteers gathering on stage at the end of the day was great and the spirit of the community was really on show.

There was a lot of content that resonated with me and some that challenged me – I was encouraged to think critically about what I heard. In my opinion these events aren’t there for you to stand in awe of unattainable brainpower but to recognize these are amazing things being done by motivated, positive, approachable people. Watching presenters that were moved to the point of tears by the passion they had for their subjects was inspiring and at the same time a personal challenge to do more.

I thought the Conversation Space concept was a great idea and it was excellent to be able to access the speakers after their talks. I asked a few conversational questions as well as a couple of pointed ones, and enjoyed the dialogue. 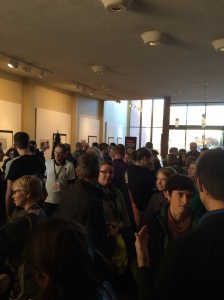 Lots of energy up in the Conversation Space.

All told a great day out and huge credit to the organizers and volunteers for making the event happen. Looking forward to next year.

I had this great idea about how I was going to start this blog.

It’s a very exciting time- new to my community, lots of places and people to get to know. When we announced we were moving to Victoria, lots of folks told us they didn’t know much about life here (unless they had lived here already, in which case they waxed poetic). What better way to get plugged in to the new community and tell everyone about it than to blog about it? The bonus was I was going to do it all on my bike, which is both my preferred mode of transport and favoured technique for enlivening cities. I was ready to get out and engage from day one, and document along the way.

A beautiful fall season was upon us and I was raring to go. A plan was hatched with friends for a weekend expedition to launch the project: to ride west sampling beaches and swimming, then ride home sampling microbrews. And then this happened:

When people ask how I broke my leg I tell them that “home built” and “rustic” are not descriptions you want applied to a zip line.

So a shift in approach was needed. Time to start seeing what I could see from a pair of crutches. I knew that Victoria has much to explore in both history and culture, but it turns out I got started a short but exhausting crutch trip down the hall from my radiology clinic. I had already gotten great care at Jubilee, but I felt extra confident after seeing one of Canada’s first modern operating theatres.

The Pemberton Operating Theatre was built in 1896 and remains largely in its original condition, now tucked away in the courtyard of a modern new facility. It’s a reminder that as recently as the turn of the 20th century, antiseptic operating conditions were kind of a big deal. Good to know the local hospital has a strong track record! Not where I had planned to start, but it fit with my interest in the form of a community.  I could see the balance between history and modernity that’s a defining feature of Victoria. They literally built the new building around the old one.

Faced with up to 12 weeks off the bike and pretty restricted mobility, I had to accept the reality that my explorations, intended to be pedal powered would begin in the passenger seat of a car. I also took it as a challenge to really utilize the transit system.  I was a total nuisance to my extremely patient wife, who carted me around (noting dryly that next time I should try to break my left foot so as to be able to drive).

I figured if I couldn’t move that far afield, I would try to meet as many folks as possible (the cast proved a good conversation starter). I had heard from a number of people that Victoria is a town where “you have to know someone” to get anything done. Frankly, I’m not sure what that means. If that means that you have to get out there and make an effort to meet people, well then no problem here. I’m not sure getting to know people is really a challenge considering how proactive and positive folks are here.

In my first couple of months on the ground I’ve met a great group of keen people. The Resilient Region Exchange and Victoria Green Drinks have proven to be a great place to start.

I am in the last couple of weeks on crutches and circling my bike like a hungry shark. Look for me soon out on the road!

Andrew Appleton is a Dad, Ecologist, Cyclist and student of Communities. He's out to learn and to engage, especially where coffee can be involved as well.